Experiences on the Hill 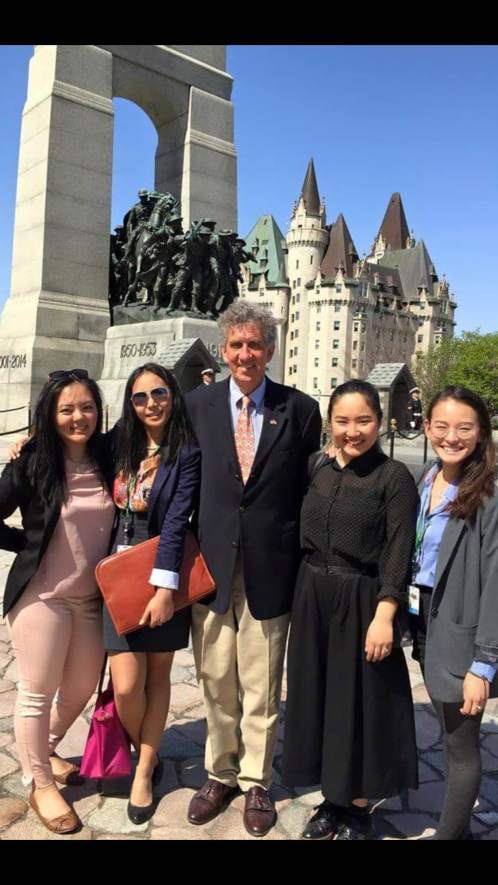 [Guest post by the 2015 Canadian Parliamentary Friends of Tibet Interns]

The Parliamentary Friends of Tibet Internship program had always been on all four of our radars. It was an opportunity to work on Parliament Hill for six weeks and get a better understanding of Canadian government. Not only that, but it was also a way to educate those with power in Canada on the current situation in Tibet. It seemed like such a great opportunity but none of us were pursuing careers in politics. However, by the end of our six weeks in Ottawa we finally understood the point, the inspiration, behind having such a program available to Tibetan youth in Canada and how meaningful the opportunity was.

This year each of the interns had the opportunity to work in four different parliamentary offices on the Hill; Chemi Lhamo worked alongside the Conservative Party, Tenzin Palyoun worked with the Liberal Party, Sonam Chokey for the New Democratic Party and Pema Tsering with the Green Party. Just like with any meaningful experience we had some wonderful highlights but also faced several challenges along the way. However, those challenges are what we hope will help make this internship program more successful in the future.

By the end of our first week on the Hill we had already been given the incredible opportunity to be recognized in the Senate. Dressed in our traditional wunjus we were formally introduced and recognized in the Senate Chamber by the Speaker during the official proceedings. Being recognized by the Senate has been reserved in the past for foreign diplomats and senior government officials. Afterwards we couldn’t help but think how one day, years from now, that relatives of ours would research our names and discover that the four of us were recognized, by name, in the Senate and feel a sense of pride for their family and their heritage.

We started off the internship with a bang and definitely ended with one as well. Since the beginning of the internship we frequently discussed having another Lhakar on the Hill event, an event which had been organized by previous PFT interns the year before. We had the chance to host an event on Lhakar for all parliamentarians and senators to attend as well as their staff. Our main goal with this event was to educate those on the Hill on the beauty of Tibet as a country and as a culture but also to inform them of the social injustices that are occurring there today. I truly do not believe any of us interns anticipated the attendance which we ended up getting.

On the day of the event our small boardroom was filled. Dressed in our chupas and supported by the Ottawa Tibetan Community Association as well as guest speakers Students for a Free Tibet Canada’s National Director, Urgyen Badheytsang, and former UNICEF representative, Samphe Lhalungpa, we informed our eager audience of the lack of human rights in Tibet as well as the beauty of our culture. By the end of the event, everyone walked away feeling a little bit more informed and with stomachs filled with delicious momo goodness.

Apart from the work that each of us did on the Hill for our offices, the greatest part of the internship was being able to meet the community of Tibetans in Ottawa. They were all some of the most humble and intelligent people we have ever met. Their generosity and the knowledge inspired us to make our time on the Hill worth it. We had the chance to meet Kasur Tashi Wangdi­La, who in 2005 was appointed the Representative of His Holiness the 14th Dalai Lama to the Americas. He graciously opened his home to us interns and enlightened us on what more Tibetan youth can do for Tibet while in Canada. Mr. Samphe Lhalungpa­La also hosted the interns and shared some of his thoughts on Tibetan contemporary art to us. Meeting Mr. Jurme Wangda­La, the former bodyguard of the Dalai Lama and the founder of the Ottawa Friends of Tibet group, was a great honour as well. Meeting all of these remarkable individuals, as well as many more, was one of the greatest takeaways from the internship.

Now that the internship has come and gone, we hope to work towards improving the ways the internship is promoted. As happy as we were to find out that we had been selected for the internship, we were slightly discouraged when we found out that we had been the only ones to apply to the internship in the first place. The program truly is a great opportunity and we believe that the way in which the program is promoted to youth at the moment is not as successful as it once was when it first started. In addition to this we hope to work on the way accommodations are organized. We hope to have future interns housed together just so that the experience could be shared amongst the interns together. This would also help in planning events, shared work, etc.

Overall, the internship was a great experience and an amazing opportunity to meet and learn from some incredible people. We hope that more Tibetan youth take this opportunity, including those outside of Toronto. It’s truly a worthwhile experience which all of us benefited from in one way or another.

← My Summer at Sarah
When Tibetan Women ruled Tibet →