Explosion In Tibet: The Beginning Of Something Great 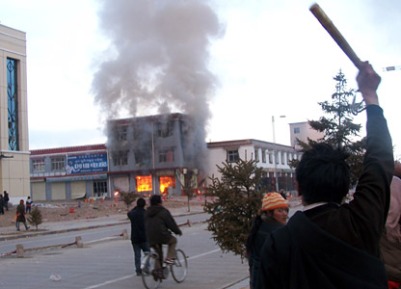 [Edited 11/16/11: A reader has asked for clarity on this post. In response, I have provided examples of Sabotage Campaign in the example section. I hope this will clear up reader/s understanding regarding my stance on Sabotage as a strategy.]

On October 26th 2011, reports of a bombing in Kham-Chamdo  were coming out from Tibet. According to reports, the explosion of the Chinese government building happened at night, it is assumed, to make sure the explosion would hurt no one.

Since then, I have seen this article surfacing at tibettruth.com. According to the writer (who I hear is a supporter), this could be a Chinese conspiracy to set up the Tibetans in the area. S/he writes “considerable doubt about Tibetan involvement in such a bombing.” There is a chance this could be true, but at the same time; Tibetans could have set off the bomb. I do, however, appreciate this person’s intentions.

To the credit of the Tibetans, who could have possibly carried out the bombing, this could be viewed as the beginning of a strategic non-violent sabotage campaign. The bombing of the Chines Gov. building can be viewed as violent, however, who ever bombed the building made sure to do it at night to possibly avoid harming anyone. Blowing up a building that represents Chinese oppression causes disruption in China’s efficiency to rule in that area. Sabotage campaigns like this is not new to freedom movements. Mandela used this strategy during Apartheid. He writes:

The Tibetans in Kham-Chamdo could also be targeting buildings that “represent oppression” strategically to send out a message to the Chinese that they are not only against the continued occupation of Tibet but they will strategically make it difficult for the Chinese to rule and control Tibet.

Lets not forget, the Danish Resistance in the 1943 against Nazi Germany began with successful sabotage campaigns that helped them gain their Nations independence. The explosion in Kham-Chamdo could be the start of something great. The Tibetans inside are the ones taking all the risks, the least we Tibetans and our supporters outside can do is to challenge our own understandings about the broader meanings behind these isolated events. Which, if seen in a larger context, can be seen as not isolated but speak to the greater goal of a Free Tibet.

In the lead up to Danish independence, Danes destroyed the Train tracks to prevent Nazi army from coming in to stop the revolution.

Egypt Revolution: Protesters destroyed the roads and/or blockaded the roads towards Tahir Sq., to prevent the military from entering the square to stop the protest. While simultaneous worked on communicating to soldiers, who later came to their side.

Tienanmen Sq: When the army first tried to prevent the protests in Tienanmen, they were stopped by civilians blockading the road who were able to speak to them and persuaded soldiers to turn back. Unfortunately, few weeks after, China brought a different band of soldiers from outside Beijing (who were unfamiliar w/ Beijing citizens) who carried out orders to tank through and crush the resistance in Tienanmen.

The point is not whether sabotage campaigns are moral/amoral, violent/nonviolent. The objective of Sabotage campaigns are to get in the way of and/or prevent Colonial Administration from functioning (bureaucratically/logistically/etc.). This makes the overall Colonial control of Tibet, a difficult job.

What we are seeing are sophisticated actions by Tibetans inside (see Lhakar) against the Chinese ruling body, this bombing can be viewed as such. Tibetans in Tibet are more than capable of embarking on a sophisticated strategic sabotage campaign against China’s ongoing colonization.  I for one, see this as the beginning of a powerful campaign.

← Thoughts on the Recent Self-Immolations by Students at the College for Higher Tibetan Studies, Sarah, India
A Tribute ( How many more lives) →

7 thoughts on “Explosion In Tibet: The Beginning Of Something Great”