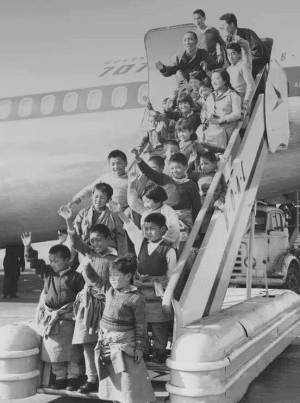 I wonder sometimes. If I weren’t educated in an elite Liberal Arts college, will I have any audience? If I so happen to have one, will I be able to speak a. English b. what I believe to be true and unique to my experiences? Will I speak for me or will I speak for all the “we’s” that govern me and my life? Will I be able to speak as Kunsang, or will I stand on a podium as a “Tibetan woman” representing all “Tibetan women” retelling one overly retold story of a. the loss of a nation and b. the Chinese oppression? Neither of these stories are uninteresting or untrue but they have become the only palatable and the only valid Tibetan story.

It is what we say every time we protest and it is our practiced telling and retelling that gives the Dalai Lama’s smile that poignant, knowing look. It says, “in spite of the countless atrocities, I smile.” And that plight and that grace have become our global image; exotic, unworldly, beyond human, and almost saintly.

However, anyone born and raised in a refugee camp will attest to the incredibly unsaintliness and the very humanness of the Tibetan people. One of my favorite leisure activity, a taste I have acquired from the many women in my lives, is gossiping. I have heard everything. There isn’t a scandal on earth that can shock me because I have heard it already. At least all the scandals that can take place in interpersonal relationships.

These are the stories that I grew up hearing. These were my Tibetan stories, the only kind I can tell with conviction and passion. I didn’t see the Chinese walk into my house with leather boots and a gun strapped on their shoulders. I am not too fond of them but that is an inherited distaste. They murdered my ancestors and continue to oppress my ancestral home, therefore, I feel justified in my hatred for the entire country. I wouldn’t call the Chinese a mythical enemy because their atrocities are real. Their atrocities led me to become a refugee but having been born and raised a refugee, my immediate struggles were not the Chinese. They didn’t inspire my stress receptors to go haywire nor did they enrapture my imagination with thoughts of bloody revenge.

My stress receptors freaked out at the thought of leaving my small refugee camp, the only world I knew, for the big bad apple of America. My imagination lurked within the communal toilets where cuckolding couples were caught, the holy lamas and their unholy practices, the opulent lives of the rich refugees and the seedy origins of their wealth, the secret cults of Shugden practitioners, the homo activities in nunneries and monasteries, and of course, Irish bar, a dank pub located at the most random part of Queens which has been the staple go-to place for Tibetans since the early 2000s. These are the stories I want to tell and base as they maybe, they are the ones I know best to tell.

It is clear to me that there is a lack of multiplicity in terms of narratives, in terms of what it means to be Tibetan, especially in the era of diaspora. There is only one valid story and that one story overshadows all other stories, as exciting as they maybe. Some of the stories left untold are important ones and ones that can quite potentially get lost in history. They are the ones that leave no trace and for a community of mainly undocumented folks, leaving a story in history without any trace is not a difficult task to achieve.

In that spirit, I decided to start my research on gentrification and its effect on the Tibetan community. When I first came to America, which was when the metrocard was still decently priced, Astoria was lit. As in, I would walk cautiously, fix my top, and lower my gaze. The creepy uncle staring down at me could be a creepy Mexican uncle or could be a creepy Tibetan uncle. One can never be too sure. If it is a creepy Mexican uncle, I can walk away. If it is a creepy Tibetan uncle, he will stare at me and then he will speak of me afterwards as creepy Tibetan uncles always tend to do. I must say, for people with such perverted and petty hobbies, they are incredibly demanding of the young women they creep-stare. Even then, Astoria had already begun to change. It was a neighborhood no one could afford anymore and I arrived as the NY Tibetans gave in its last hiccups at Astoria.

Now, Astoria is beyond most people’s reach and certainly beyond the reach of asylum-seeking Tibetan refugees. I wanted to know more about what Astoria was like and what Astoria meant to my mother and her friends. It was where they spent their earliest days in America; eight or ten of them would be cramped in one-bedroom apartments. I know of these stories vaguely. Growing up my mother and her friends would speak, never full stories because everyone is privy to them except for me, and end up in fits of laughter. My mother already had me but she left me with my grandmother to come to work in America. In a sense, she was able to have a second maidenhood. As fascinating as her first maidenhood was with wild bicycle rides around town, discos, cute Nepali boys, and baths in the now grossly polluted and vomit-inducing nakhu river, her second maidenhood enticed me more because I want to know how she made a home out of this strange land and how she lost that home in a distinctly American way.

I interviewed my mother and her sisters. The task was near impossible. In between kneading dough, munching on various snacks, random gossips was I able to get bits and pieces of things that sounded relevant. It wasn’t that they were belittling my work or my capabilities as a storyteller. It wasn’t that they weren’t supportive of my aspirations. They just didn’t believe their story to be that important. What is loss of a neighborhood in the face of loss of a nation? What is gentrification in the face of colonialism? What is Astoria to Corona when your parents trenched through the Himalayas?

Each new Tibetan that is born is born as a vessel. Our task is to take that story of colonialism, of loss of a nation, of that trek through the Himalayas, and recreate it. We also inherit yearning for the homeland. In the end, a lifetime is spent waiting to return. Nowhere but Tibet is our permanent home, everywhere else is a pit stop, therefore, irrelevant. We are supposed to fast forward through this; the part where we are at right now which is the waiting part. We lost a nation, now we are waiting, and when we win, the Tibetan story will complete itself. Such is the expectation. I am not opposed to Tibet becoming free. I dedicate much of my time to this freeing Tibet endeavor. Do I believe it to be a possibility within my lifetime? No. So, I can’t really wait for Tibet to become free to tell the grandest Tibetan story of all time. I am not sure if I want to be tasked with that responsibility either. I’d much rather tell the story of Pedro, the shady Puerto Riccan entrepreneur, who made a business of immigrant nostalgia for home. He tapped the phone booth from Astoria Broadway to Astoria Steinway, allowing immigrants to speak to their families back home for something as cheap as five dollars. Naturally, those with similar time zones gathered around similar times. For Tibetans from India and Nepal, it was late evening.

There was also an entire building called Majnu ka tila building. Majnu ka Tila is a Tibetan settlement in India. Nicknaming is an old Tibetan habit. I was never given any names. I wasn’t distinct enough to be ever given a nickname; neither too pretty nor too ugly, just pleasantly plain. Therefore, I assume the building must have been distinctly Tibetan for its namesake to be a Tibetan refugee camp.

Many Tibetans are in America on asylum or are undocumented immigrants. When they do become citizens, their passport states their place of origin as China. As far as official documents are concerned, Astoria was never a home for Tibetans.

One thought on “The Othered Tibetan Stories”