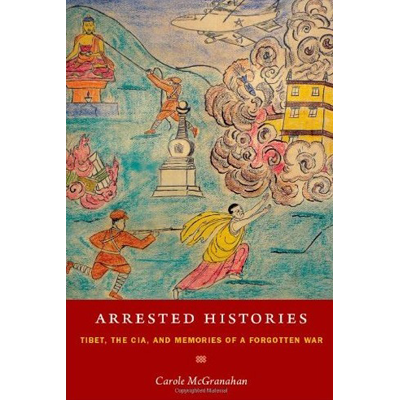 Carole McGranahan’s Arrested Histories: Tibet, the CIA, and Memories of a Forgotten War is an ethnography of heartbreak (2010). A heartbreak that began with the loss of Tibet. Every time I read this book, I am reminded of people from my childhood who were of the generation that was raised in Tibet but later died in exile. The same people who would share stories of Tibet prior to its invasion. These stories often began with joy, but would end abruptly with sadness—a sadness I did not understand as a child, but was taught about and grew familiar with as I grew older. This sadness, heartbreak, is captured and historicized in this book. Central to the book are themes of histories, that McGranahan argues are “arrested.” However, these historical arrests are not permanent, instead, they are histories that await an eventual release (24). The histories that are put on arrest in McGranahan’s book are those of Chushi Gangdruk veterans—the resistant army that fought the Chinese invasion of Tibet. Thus, this book is about contested histories and subaltern subjects.

Chushi Gangdruk veterans piece together a history of resistance using memories of their fight against Chinese invaders. Though the resistance was officiated in Lhasa by leading Lithangpas, the resistance, according to many, had begun in Kham—where Chinese soldiers began their advance into Tibet. Unlike China’s narration of the event as “the peaceful liberation of Tibet,” many recall violent resistance, in which, Khampa men and women mobilized and fought. Yet, resistance history was contested not only by China, but by the Tibetan Government in Exile—the institutional structure that represents Tibetan sovereignty. In many ways, this book is an exploration into the reasons veteran histories are put on arrest, and are contested, and denied. What McGranahan uncovers are veteran memories of homeland and family prior to the Chinese invasion, memories of Chinese soldiers advancing, memories of unorganized fight and flight, memories of alliance building, memories of fighting for homeland, and thus nation. “If history is narrative,” writes McGranahan, “memory is what drives historical narratives; that is memory consists of the stuff and the energy with which histories are forged or forgotten” (19). What McGranahan uncovers then, are memories of veterans and their resistance histories. But why the arrest? According to McGranahan, it was a combination of two things; 1) the agreement that the US would provide assistance only if resistance fighters kept their involvement a secret (a promise honored until British film maker George Patterson made the film “Raid into Tibet” without permission from CG leadership that prompted CIA agents to demand for Gyalo Thondup to replace Baba Yeshi, even though CG soldiers at the time thought of Gyalo Thondup as having no business in structural operations of CG (156)), and 2) the Tibetan Government in Exile (TGiE) launching international efforts that politicized the Tibet movement along human rights ideologies in the 1990s that required the abandonment of resistance narratives that revealed Tibetans as having taken up arms in their resistance against the Chinese invaders—a narrative that worked against TGiE’s framing of Tibetans as peace-loving, and so, deserving of international assistance. The veterans also did not win, due to shifting political relations between the US and China.

For the veterans, Chushi Gangdruk history began with Khampa sovereignty clashing against Chinese ones. It was also about Khampas choosing to become Tibetan—an identity that was resisted prior to Chinese invasion—in order for a united flight against a common enemy that threatened the whole of Tibet: The Chinese. For them, resistance history was about Khampas becoming Tibetan and taking the onus to fight on behalf of not only Khampa families and clansmen, but a nation they recognized as Tibet. Thus, resistance history for veterans, were about the rejection of Chinese colonization in place for Tibetan nationality. Though Chushi Gangdruk history originated in Kham (even before they adopted the name Chushi Gangdruk), and with Khampa men assuming leadership positions, resistance soldiers were Tibetans of all background. However, their nationalist history was being enacted (through resistance) and made during a time when multiple groups were vying to take control of the unfolding Tibet situation with China. “Strains reflected,” writes McGranahan, “the troubles taking place in civilian life between the United Party, the 13th group, and the government-in-exile” (154).

Invasion was recent, thus, exile was new. Tensions from such fragmentations during this time makes itself visible within Chushi Gangdruk’s own dealings, as well as civilian life. However, deteriorating conditions for Tibetan refugees demanded such consolidation of leadership to address conditions of invasion and exile. In the end TGiE, led by Gyalo Thondup, assumed that role due to the prominence of the Dalai Lama, however, such fast tracked method came at personal costs. This part of exile history becomes important in understanding how leadership in pre- and post-invasion Tibet operated as multiple, diverse, and at times clashed with one another—characteristics that kept certain regions and its leaderships, like Kham, autonomous and under its own authority throughout pre-invasion Tibet. It also reveals how the consolidation of Tibetan authority under one government, the TGiE from central Tibet, was necessitated by foreign invasion and the uniting role the Dalai Lama played for many. Thus, conditions of invasion and exile demanded such fast-tracked consolidation of power. Under such conditions, it became alright for Chushi Gangdruk to be fighting a secret war against the Chinese following the Chinese invasion (when political consolidation had not been in complete effect), but became anti-nationalist when enacting political relations with Taiwan on behalf of the Tibetan nation—when exile governmentality had been consolidated under the TGiE. An event that became framed in the Tibetan community as one motivated by Khampa nationalism and against Tibetan unity, when the leadership themselves make clear that their actions were enacted on behalf of Tibetan sovereignty.

To be clear, for veterans, their history and continued involvements were absolutely about their homelands in Kham, but it was also about obligations to Tibet as a whole and to the Dalai Lama. However, by the time Chushi Gangdruk initiated negotiations with Taiwan, political authority rested under the TGiE. Thus Chushi Gandruk histories and actions becomes misinterpreted and put under arrest for TGiE’s project of unity; “where unity is considered to be of paramount importance,” writes McGranahan, “historical variation is at times a precarious project. Under such circumstances, the possibility and power of alternative pasts to challenge present and future is both empowering and disabling” (205). However, unity should not be taken so lightly, while it worked to shut down certain memories and histories, it also served to sustain newly exiled Tibetan refugees. Sustenance that certain families of the Chushi Gangdruk faction who were excommunicated did not get to partake in.

It’s strange to think of this book as being six years of age, it feels as if it was a year ago that this book came out. It was one of the reasons why I decided to move all the way here to Boulder, CO, to work with someone who doesn’t shy away from Tibetan sovereignty. Skirting away from topics of Tibetan nationalism, as this book shows, is impossible. Veteran history is undeniably about Tibetan nationalism. The way the men and women in this book engage their memories of pasts and presents, propelled them to act as sovereigns (to protect their family, ways of life, approaches to the world) against foreign invaders, so that they may secure Tibetan futures. As McGranahan points out, veteran history has been experiencing release in exile. A release that began with veteran autobiographies in Tibetan, with this book adding to such releasing in English. It is now a celebrated history among civilians in exile (although they may still be on arrest in Tibet) who view such histories of resistance as powerful assertions of Tibetan sovereignty—an assertion that Tibetans continue inside and outside Tibet. Not too long ago, I was reading an article on a Tibetan woman named Gonpo, who had been the daughter of the last serving Khampa King of the village Mei, who now resides in Dharamsala. Along with her history, she talks about self-immolations that had taken place in her town. Gonpo mentions how few of the self-immolators had been the grandchildren of her father’s officers. Having connections to reactionary pasts make living in the present under the Chinese settler state hard. Somehow, I can’t help but think of their chosen acts of self-immolation in connection with such historical pasts. Thus, this book uncovers intersecting histories of imperialism (US), settler colonialism (China), and nationalism (Tibetan) that continue to effect Tibetan lives.

What is most convincing about this book is that it is an ethnography that takes veteran hearbreaks serious and treats them with care. In that, the book is a record of their collective heartbreaks. Tibetan readers will find that the heartbreak recorded are ones we all know too well. Losing Tibet was a shattering experience, both literally and figuratively. Works on Tibet produced in English have always obsessed with the religious element of Tibet, choosing to selectively ignore the political side. Contemporary ethnographies have largely remained in the domain of the religious and either cover historical periods prior to invasion or post-invasion, but never during the period of invasion and its aftermath—this book is rare in that sense that it records historical memories of exactly that time period. Contemporary scholarship on Tibet also tends to focus on Tibetans in Chinese controlled Tibet or exile India as if such political conditions had always been as such–choosing to never disrupt or disturb such assumption by not acknowledging histories of invasion. Works either frame Tibetans as always struggling against the conditions of exile or struggling against modernization developmental projects under the Chinese state as if the historic invasion of Tibet by China was an episodic event, and not a foreign structural force that continues to impact Tibetans on either side of the border. What’s different about this book—aside from that fact there are very little anthropological works on Tibetan exiles—is that it engages that historical period. Thus, the subject of Tibetan politics and nationalism are unavoidable. In fact, it is central to the story of not only Chushi Gangdruk but of exile Tibet—of the messiness of centralizing power, a mess that had been necessary for survival and continuity for Tibetans who had not anticipated becoming refugees. This is why this book becomes unique among its contemporaries.