Karma Emchi, better known as Shapaley, released his latest video today on Lhakar and within a just few hours “Tsampa” became another massive hit for the Swiss based rapper. “Tsampa” directed by Tenzin Wangchuk (better known as Exiled Prophet of the MOAMENT Crew) has Shapaley shining once again, this time with him rapping about the importance of tsampa to Tibetan identity.

By the afternoon “Tsampa” had become the next big Tibetan sensation, shared all over Facebook and Twitter after Karma posted it on his own page from Zurich earlier today. As one the main staples of a traditional Tibetan diet, tsampa is a familiar food almost every Tibetan can relate to. This viral video about one of our most favorite foods can only make it that much more cool to be a tsampa eater. 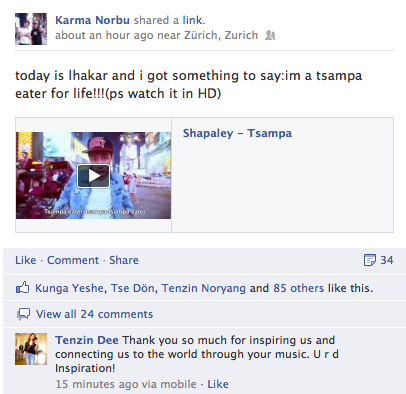 If people ask me who I am, I tell them this, I’m a Tsampa eater. The land of snow is where I come from. I drink butter tea and eat jerky, I play dice and recite mantras. I move my hips to the right and left. I carry a tsampa bag. I feel so fresh! Thats right, I don’t need a car. When I go to work I ride my yak! 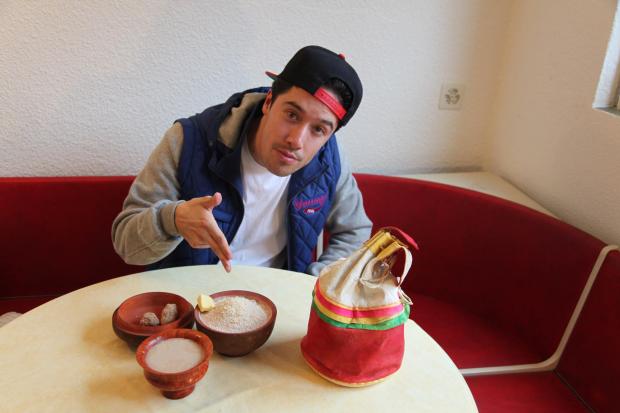 One of my favorite parts of this song is the chorus,

Let me tell you what tsampa eaters are like
I’ll explain it. Tsampa eaters ain’t the ones who are deceitful…
the ones who lie and cheat
Honesty and warm-heartedness is our attitude
love and compassion the basis of our soul
Our parents gave us tsampa
so we’ll give it to our kids
the Tibetan spirit will always remain
You can threaten us, but we keep doing our thing
I’m sorry
you can’t stop us!

I’m a tsampa eater from Tibet.

I’m a child of the land of snows.

“Tsampa” is the third video from Shapaley which has gone viral with over 1200 views in just a few hours after it’s debut. As I watched people proudly post it online throughout the day I thought it was the perfect way to celebrate Lhakar online. Just as he did last year when he released the video for his popular song “Made In Tibet,” Shapaley chose to release his new video on a Wednesday, continuing his support and solidarity with the Lhakar movement.

Last week, Tendor, Executive Director of Students for a Free Tibet updated his Facebook status as he usually does, often sharing breaking news from Tibet, inspiring us with thoughtful comments or even cracking a joke. So I wasn’t surprised that his status last Wednesday had to do with Lhakar.

Don’t box Lhakar into a diet or dress code movement. It’s about taking action in many different ways. It’s not about the chupa, but the intention with which one wears it. Not about eating veg, but the purpose of foregoing meat. Lhakar is a revolution of the mind, that’s why it’s untouchable & immune to China’s guns or tanks. Keep Lhakar broad, agile, dynamic, unpredictable, open-ended. If it’s policed, it’ll choke. Keep Lhakar free and positive, a one-size-fits-all movement.

What surprised me was how candid and honest his statement was and how it resonated so well with what I believed the Lhakar movement should be- open-ended, powerful and creative. Shapaley is one of those dynamic young people who embodies the Lhakar spirit and broadens the movement by thinking outside of the box of just wearing a chuba or cooking veg momos. He manages to acknowledge Lhakar in a deeply insightful and creative way and I hope that there are more young Tibetans out there who think like him who are coming up with new ways every day to define this movement of non co-operation and resistance. We can keep this an open and creative movement like Shapaley has shown us today. Lets do it.

← Pull My Spirits Up High
Access to the histories of home →

4 thoughts on “Calling All Tsampa Eaters!”