When I was asked to write a reflection on my experiences and reasons, which had led me to study Tibetan at Sarah, I realized the interest was sparked the summer I was 15. 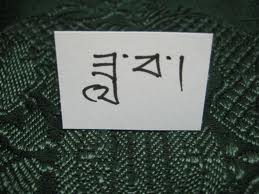 My dad decided to send me to the TCV (Tibetan Children’s Village) in Dharamsala, India, summer camp for Tibetan children living abroad to learn Tibetan. The program was 6 weeks long and by the end of it, my spoken Tibetan had not become any better, nor did I read or write any better. However, I did come across an important lesson; I realized for the first time I could not hold a conversation in Tibetan without having to use English majority of the time. I was losing my grasp on the Tibetan language. This shocked me since I had only left India when I was 10.

I moved to Cambridge, MA when I turned 10 to join my dad along with the rest of my family. Just like many other transnational immigrant families, my family and I also had a tough time growing up and adjusting as a working class immigrant family. Because my siblings and I were so young, we picked up English fast and started to transition into the American society quicker than my parents. Our social reality had become American overnight and we were becoming American. While my parents tried to meet this challenge by keeping our cultural identity proactive–by trying to keep us speaking Tibetan at home, making us go to Sunday school to learn Tibetan and etc.–they ultimately could not ignore the reality of living in an American society which was raising my siblings and I American, my parents nonetheless did their best.

Of course, I did not see it this way at the time. Instead, I felt distant from my parents because I felt misunderstood by them. I was growing older into an individual they did not identify with culturally. While my parents were trying to balance the challenges of raising us Tibetan with challenges of their own; I was consumed with the many confusions and identity crises that come with balancing and being American, Asian, Tibetan and a teenage girl in America. Later I realized, in my confusions, I had misunderstood my parent’s intentions. I was their first child, and it was their first experience in raising a Tibetan-Asian-American daughter and more often than not, their love and care became lost in translation.

Although it was hard, my parents were successful in helping me hold on to my cultural identity by keeping me involved in cultural and political activities in our small Tibetan community. I became more and more involved in political activities, which led me to many community gatherings. But at these gatherings, the main medium was usually Tibetan, which was becoming a problem because I almost always needed a translator to fully understand everything.

When I volunteered and worked in the Tibetan community in Dharamsala, India, from 2007-2008, the problem of language barrier became more obvious. I was living in a fully functioning Tibetan society where Tibetan language, reading and writing were not only relevant but a reality. Due to my limited Tibetan, I could not understand and take part in social and community discussions and activities on the level I would have liked. On a personal level, members of my family and community, young and old, whom shared stories with me, became lost in translation most of the time and visa verse.

When I reflected on the difficult time I had in understanding and communicating in my own language, it saddened me deeply for missing out on the intimate details of my family, community and more importantly, His Holiness the Dalai Lama. I realized it was not just enough that I became aware of this difficulty; I decided I needed to put this awareness into practice and looked into Sarah College for Higher Tibetan Studies.

I studied at Sarah for about 2 years. I studied basic Tibetan reading, writing, grammar, history (pre & post colonization) and Tibetan Buddhist philosophy. My understanding of spoken Tibetan and literary Tibetan has gotten better, and my Tibetan vocabulary has increased. I feel more confident each day with my Tibetan. I no longer feel intimidated in joining and understanding conversations. But most important of all, now when I attend His Holiness’s talks, I can confidently say I understand almost everything he says and this has been one of the more important gifts from my time at Sarah. I am very happy I made the decision to come study at Sarah because it has helped me gain a new insight into my community and culture that I did not have access to before.