The other day Aba took me to see a rinpoche before I left for the States. In the past he’d do it before I went back to boarding school or, later on, college. I remember the first time quite vividly. It was raining heavily and Aba dragged me to Bir to see Dzongsar Khyentse. I was in a foul mood from the moment Ama woke me up earlier than usual and dressed me up for the occasion. As we waited outside rinpoche’s residence in the rain under a bamboo grove I remember looking at Aba’s pants and shoes all wet and bespattered with mud and wondering what was the point of it all. Then as we were ushered in silence into a well furnished room with shelves stacked high with books, I was overcome by a feeling of awe about what awaited us in that room.

Aba himself had once gone with his father to see the previous Khyentse Rinpoche at Dzongsar in Tibet when he was young.  It is impossible for me to imagine what kind of ‘mood’ Aba might have been in on that occasion. I believe such a question wouldn’t make much sense to him. Anye, my grandfather, had offered a horse to the rinpoche. Aba told me Anye was very fond of horses. Recently, I learned that Aba himself had offered a silver ghau to the present Khyentse in my name although he didn’t say a word to me about it.

On another occasion, Anye had taken Aba to see the Dalai Lama at Dege Goenchen in 1955 when Kundun was on his way back to Lhasa from China.

I must have been around twelve or thirteen. It was spring and took about a day to get to Dege Dzong from our drog-sa on horseback. There was only one pass to negotiate. My father and I were riding two horses – Gha-soe and Dranzi. Aba loved horses and he had bought Gha-soe from Torutsang [1] who had in turn bought it from a family named Ghasoetsang. The family’s name stuck on the horse but the horse proved a nuisance. Torutsang couldn’t tame it, so my father bought it from them. Dranzi got his name from his colour and the white mark on his forehead [2]. People in our area often remarked what fine horses they were.

The courtyard of the Dege Goenchen where they traditionally performed their phurba and drukchu cham was filled with vehicles. They were all military ones. There was a huge crowd and I thought we wouldn’t get to sit anywhere but somehow we managed to seat ourselves inside the temple. Along with the Dalai Lama, the Karmapa and Sakya Dagchen rinpoche were also present.  Everyone sat on the floor except for the Dalai Lama who sat on a high throne. He was very young and must have spoken for at least two or three hours. I couldn’t understand a word. Still, to this day the image of him speaking, swaying gently on his throne as he spoke is clear in my mind [3].

When we got to the monastery, we learned that the rinpoche had just left for Delhi that morning. I felt we should have called in to check before coming to the monastery but I couldn’t imagine Aba doing such a thing. It would have been deemed namtok langyak. We were invited in for tea by the nyerba who seemed to know Aba well. Remembering Ama’s instructions, I handed the nyerba a five-hundred rupees note for soka-trinchoel. Actually, she had told me to offer 1000 rupees but I felt five-hundred was enough. Aba agreed with me and that eased any doubts I may have had about being not generous enough in dharma.

We went to see the temple and the monastery compound. Aba spoke reverently of the previous incarnation who had founded the monastery and overseen everything from the elaborate wood carvings on the temple door to the iconography on prayer flags. The altar of the tsogkhang was under renovation. The young men working on the Buddha statues were all from the local Tibetan settlement. The settlement itself had developed around the monastery and the late rinpoche had successfully administered both together. It was rather impressive. There was a stupa of the rinpoche and Aba pointed me to a sapling of Bodhi tree which had ‘miraculously’ grown around it. There was also a small water-fountain which seemed to be out of order. Aba said the water was holy and drank a palmful, asking me to do the same. The water was murky and greenish. I scooped up a palmful and patted it on my head, somewhat deliberately and reflexively.

Right outside the Tibetan settlement, a plot of land had been walled off partially. It was the site for a new monastic college. Apparently, there were some ongoing legal issues about the land which had halted the construction. Aba entered the premises and fell into conversation with some of the workers on the site. I followed him thinking our choe-jel wasn’t quite over yet. The workers were mostly migrants from other states and sounded relieved that the construction was finally getting underway. The legal hassle with the land had been resolved. Was that a manifestation of worldly zepa-trinlay of the rinpoche who was building the college, I asked myself?

We took the bus home. It was a bit disappointing to have missed audience with the rinpoche. But the choe-jel with Aba was worthwhile. Despite our filial relationship, I have often felt there was something enigmatic about Aba. Just beneath the layer of his taciturn demeanor that I am used to seeing, Aba always seemed to have a wealth of stories, anecdotes, and recollections that would be not only interesting in themselves but also revealing something about himself. This was most apparent when he was talking about phayul or the lamas that he revered. The way he remembered the previous reincarnation informed me about the rinpoche but it also made me think about Aba himself. Aba’s religiosity, which was undoubtedly a big part of him, seemed to me as encompassing both the spiritual and the mundane. Although I may not share it, I cannot say I have been unaffected by it. For him, the sphere of activity of a ‘great master’ or a lama tramo[4] was not limited to spiritual accomplishments alone. In the present case, it also included everything from getting the design of the temple altar right to resolving legal issues about newly-bought land . Aba also had an enthusiastic grasp of facts and trivia about their lives, lineages, and monasteries that made him more of an aficionado than a simple devotee. (Sometimes I think these ‘great beings’ populate his mind in the same way as great cricketers of the past do mine.) Maybe the milieu that he grew up in shaped his religiosity. The history of Kham is filled with both lamas and chieftains (poen) of prominence. While Dege, along with Nangchen and Lingtsang, had their gyalpo, in other Kham states the rulers were called deba (Ba, Lithang), poenpo (the Hor states such as Beri, Drango) or lama (Chamdo, Drayab, Riwoche). Aba still uses the phrase la-poen-nyi (‘the duo of lama and chieftain’) when talking about the founders of our Tibetan settlement in exile.

I was also disappointed that Aba hadn’t understood a word of Kundun’s teachings at Dege Goenchen. But his recollection of that whole episode, including the bit about the two horses, was poignant and precious for me. People of my parents’ generation often refer to the Chinese invasion as dhu-log-dhu – ‘when time collapsed/was turned upside down’ because that cataclysmic event destroyed and turned upside down their land and their way of life. But Aba’s memory of going to see Kundun with Anye had stayed intact and I could connect to it because I have also gone with Aba to see lamas, including Kundun, and Kundun still sways gently on his throne when he is giving teachings. It is an image that is clear in my mind, too.  Aba’s recollection also gave me a glimpse of the nature of relationship between Aba’s family and the Torutsang. This is not merely of an academic interest to me. The way Aba remembers the past of his phayul is often nostalgic. He is obviously proud of the land where he comes from. Of the people – men and women, lamas and chieftains, warriors and victims – his views are varied and, sometimes, paradoxical. And I share his nostalgia although I have never lived or experienced that past. 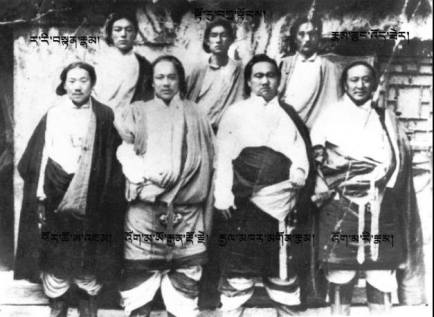 Group of Dukor chiefs of Dege. Tatop of Torutsang is in the middle of back row.