A few Lhakar Wednesdays ago, NY & NJ Lhakar team held one of the most (among many) fun celebratory event. According to their Facebook album, they wrote,

Jackson Heights, as you may all know from previous LD posts, is what a few of us folks call ‘Little Tibet’ due to the high number of Tibetans the place attracts.

Gorshey is a favorite among Tibetans, especially among elders (who always seem to be the ones starting it). The circle dance only has one requirement, to join in the circle (which can bloom to a huge size depending on participants) and dance, whether perfectly or imperfectly. It’s wonderful, in that it’s inviting and inclusive. I’ve always enjoyed them since childhood because of how fun and inviting they were. For Tibetans living in the West, Gorshey’s are hard to come by. They only take place during communal celebrations; they are rarely spontaneous and they almost always take place within communal space. What I found wonderful about NY and NJ’s Gorshey is that they decided to take a circle dance to spaces that Tibetans may judge as casual or mundane, yet still a little Tibetan. Jackson Heights is where Tibetans go for shopping, eating, and hanging about–it’s the space where they do the things that would be considered the mundane every-day (Tibetan) activities. It’s not quit the space where you’ll find Tibetans doing cultural things specific to the Tibetan culture, like the Gorshey, because it’s a shared social, not so much cultural, space, also, it’s not really our space.

As I mentioned, those of us in the West, we wait for special events like Losar, weddings, HH’s birthday, and so on, to party together as a collective in a Tibetan space where Gorshey is popular among other dance favorites. While in Dharamsala, Gorshey’s are known to break out in the middle of the busy intersection in McLeod, such events in NY is not the norm. So when I saw NY & NJ Lhakar team’s Gorshey video in Jackson Heights, the every-day space for immigrants of Tibetan, Nepali, Indian, and other south-Asian descent, I was immediately hit with nostalgia. Like I said, I always enjoyed Gorshey from childhood, because of how inclusive it was. It was the one space where Tibetans did not judge my imperfect Tibetaness but accepted the imperfections, whether I danced it right or not didn’t matter, and if I wanted to get the steps down the people closest would help explain how the steps worked. It was a space of enjoyment, along with dancing came laughter for dancers and watchers. For me, as a Tibetan American-teen back in the days, it was where I found common ground and laughter with the oldest in the community.

It was wonderful watching NY & NJ Lhakar team do the circle dance in a space where you wouldn’t normally find Tibetans doing the Gorshey and asserting a sense of self and a collective in a communal cultural and public way–such assertions are usually reserved for political activities. It was also nice watching them transform that space temporarily into our space through Gorshey.

Here are some pictures from the event that you may enjoy: 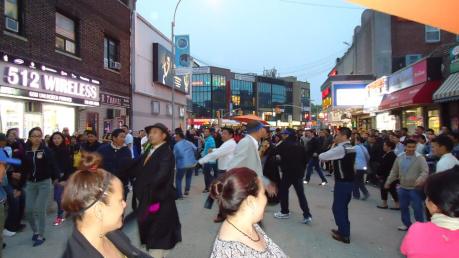 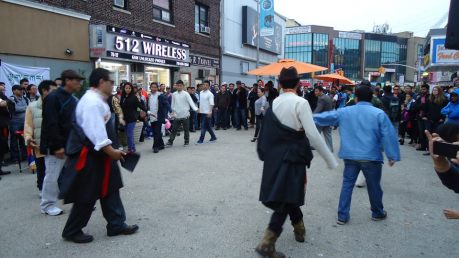 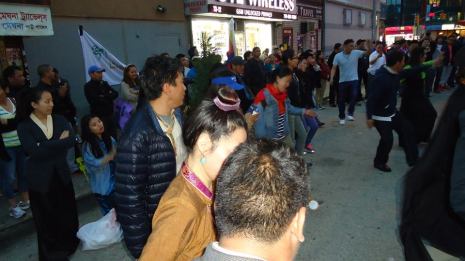 ← Lhakar on the Hill
Face To Face With The Dalai Lama →

3 thoughts on “Dancing in New York”