Lhakar has been widely observed both in and outside of Tibet since 2008. In Tibet, most of the Tibetans observe Lhakar in more traditional ways to preserve and promote our Tibetan language and culture under heavy restriction. Where as, many Tibetans and Non-governmental organizations in exile politically raise our serious issue at the global level by practicing Lhakar. 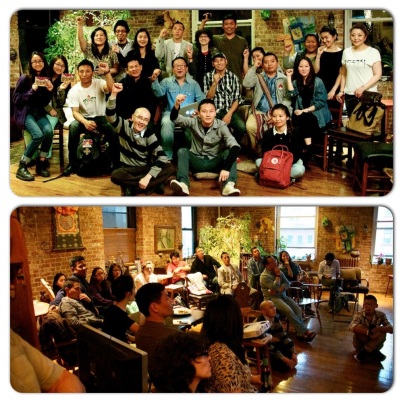 In New York City we have had Lhakar events every week. On May 1st we had Lhakar discussion at Jane’s home; who is a great supporter of Tibetan cause and a Lhakar Award winner in 2011. As usual, Jeff (spouse) and herself prepared snacks including fried potato, chips, fruits and drinks. Her preparations made me feel like I was at an important event. We had started that evening with brief personal introduction. Later, each participants shared two of the most inspiring Lhakar events they have taken part in the past years and what inspires us to get involved in the Lhakar movement in 2 minutes.

In retrospect, for me, two of my most applauding Lhakar vigils were urgent lobby in Washington DC in December 12,1012 to request our representatives to sign to the Congressmen McGovern and Wolf’s letter to Secretary Hillary Clinton to lead a more “Coordinated diplomacy” on Tibet with like minded governments and Die-in action at Times Square on July 25,2012 which symbolize self-immolation in Tibet. There were lots of exciting things to share. Even I tried my best to tell all the stories, but I exceeded the given time. Of course, I was not allowed to tell all the awesome experiences but I can use this platform to share two of my favorite Lhakar events more openly and in depth.

My first remarkable Lhakar was on 12/12/12. It was a cold winter morning. Around 40-50 Tibetans in New York suited up and some of them wore chupa and assembled in front of Norling Tibet Kitchen at Jackson Heights. I was called by some of Tibetans who didn’t register and were asking about seat availability. When the bus engine starts, we started to debate on various Tibetan issues and we were surprised at we got there. I saw senior staff of SFT and other organizations based in DC who were waiting for us before our bus parked. A camera of The Voice of America Tibetan section was on us. As soon as we settled, Kate Woznow (Deputy Director of SFT) started informing us about the schedule for the day, followed by TenDor who translated it in Tibetan. We were divided into 14-15 small groups, our target was to reach all the 435 offices of Congressmen/women to each group expected to visit 25-30 offices to urge our Congress people to sign the letter of congressmen McGovern/Wolf’s latter to Secretary Clinton. It was my first time stepping in Capitol Hill and speaking with High-level officials. At first, I was a little nervous with my lack of experience and my fluency in speaking English. Further more, our group expected me to lead our team! As we passed the screening gate, we wondered from where to start. Eventually, we followed the number of offices and went into every office; we humbly requested them onto sign the letter, we took their contact information, and talked about the self-immolations crisis in Tibet to legislative assistants or foreign policy staff if Congressperson her/himself was not in the office. I was inspired and pleased by seeing His Holiness’s photo frame on the wall of the office and their positive responses. I had felt fulfillment to be able to amplify the silent cries of Tibetans inside Tibet. After finishing lobbying in three hours, all the groups reunited in front of the Capitol Hill and took some photos and we started the march to the White House. Most of the participants didn’t get to eat their lunch. It was getting dark while we were chanting near the White House. Finally we concluded a daylong Lhakar vigil playing some of the best 1-minute video message to President Obama and powerful speeches by Lhadon Tethong and Jigme Ugen. That day was fast, unusual day, and my debut as a new lobbyist for Tibet.

On July 25th 2012, led by SFT intern, Lhakar was organized for the first time in Times Square to raise the awareness of 49 self-immolations in Tibet under the ruthless policies of China. Times Square is one of the most attractive spots, roughly 1.6 million pass through this area daily according to an online source. Our event was short (5-7pm) but it has been very sweet and a great success. Most of the people did die-in action symbolism of self-immolators in Tibet at the face of the famous red stair. The participants covered themselves with a Tibetan national flag, to show respect. There were some people who patiently carried the banners with message on while one of the intern verbally explaining what was going on. At the same time, few youngsters were asking for petition signatures for global intervention while some of elders were distributing flyers. Few of us technically appeared in the huge American Eagles billboard with various slogans of crises inside the Tibet. Within two hours, I felt like we made this place louder, more active. More importantly, the tourists who visit Times Square that time not only must have felt the beauty of it but also they became aware about sufferings inside Tibet. Here is what I wrote on my facebook status that evening “We were able to glue eyes of many people on Tibetan issue thru Today’s Lhakar vigil in Times Square; two young ladies eagerly asked me “how they can help our Tibetan cause?” Even cops approached me and asked what is going on inside Tibet? Instead of asking for sounds permits!”

How wonderful it is to reflect on past Lhakar vigils and recall all the achievements and memories! It’s the extraordinary memories in Tibetan struggle where I could yet involved in. Through this Lhakar Revolution, my exposure is expanded(ing), I am very grateful to people who guide me while organizing these vigils. I am equally thankful to those who I came to know or got closer by working to pushing this movement to a higher level. One of the things I noticed from many of our Tibetan comrades is, (if not wrong) we forget our struggle and relax when nothing tragic is happening in Tibet. But on significant day like March 10, almost all the Tibetans and supporters take participate in mass rally on the streets and protest to Chinese Consulate and embassies all over the world in remembrance of March 10, 1959. Of course, one day in a year is not enough for a struggle. We all know that more we pressured the Chinese Government, more serious our issue will become. Therefore, I think most important feature of Lhakar movement is to encourage all the Tibetans to do something on our Tibetan cause every Wednesday and it is helpful to push ourselves into our struggle by consideration of Lhakar Revolution.

← Ethical Shopping
A Home in Tibet : A Review →