The following post was submitted to Lhakar Diaries by Dechen Tsering from Berkeley, California. She is the former president of the Tibetan Association of Northern California (TANC) and recently appeared on the Tibetan news program Kunleng TV advocating for Tibetans to support Obama (woot woot!) this past election. She is also the Project Director of the Sisterhood for Wellness Project, Collaborative Initiative of Community Health for Asian Americans (CHAA) & ACHA Tibetan Sisterhood. We are proud to share her post as it is interesting to hear a reflection on that memorable event last September from a Tibetan perspective.

Today, Sept. 29, 2012, will forever be imprinted in my memory, and I hope in the memory of my 11 year old son (Taj) as we joined several 1000 Burmese and local Bay Area residents to see in person “The Lady” Daw Aung San Suu Kyi – a Nobel Laureate (1991) and icon of human rights and democracy. No doubt everyone in the War Memorial Gymnasium at USF had been waiting for this moment for decades with hope and trepidation since only 5 years ago, the Saffron Revolution in Burma by Burmese monks was ruthlessly crushed by the military dictatorship while DASSK was living under house arrest and many of us feared the worst for Burma. Yet, as if to prove that miracles are possible, the world celebrated with Burmese everywhere when in 2010, after 15 years of house arrest, DASSK was finally released and hopeful shifts towards democracy began to emerge within Burma’s political structure. Yet, knowing she could’ve been re-arrested anytime by the military regime, how many of us thought we’d actually get to see her and hear her speak just two years later? 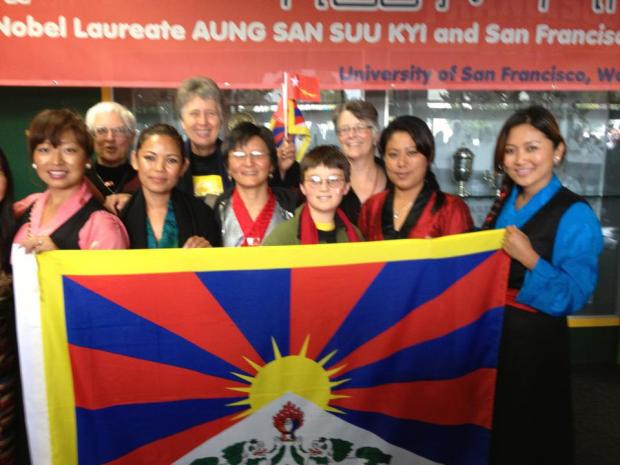 What a memorable day!

Today was a dream come true for many of us in the Bay Area.  I hung onto every word and message she delivered with such integrity, grace and lived conviction.  Having been inspired for decades by DASSK – despite never having laid eyes on this humble daughter of Burma’s “founder” and her father, Aung San – I was moved to tears at how the seemingly “impossible” can indeed become possible. I hoped silently for a similar transformation for Tibet. Sometime during DASSK’s talk today, I pinched myself to make sure her presence wasn’t a mirage. Fortunately, it was all very real. Burma’s S/Hero was right there on stage shining in full dignity, grace, courage, wisdom and most of all, humility.

Daw Ang San Suu Kyi’s words reflected an unwavering principle of non-violence, conviction in the power of dialogue, graceful integrity and courage that appeared to be grounded in a deep sense of self-awareness and spirituality. Sound familiar? Yes, as I sat there listening to DASSK responding the 20 or so pre-assembled questions, I heard many parallel messages with what His Holiness the14th Dalai Lama often speaks of. My heart silently prayed that someday, His Holiness would also address an audience with news of revolutionary shifts towards genuine democracy and freedom inside Tibet! The two Nobel Laureates met for the first time on June, 2012 in London while both were visiting Europe.

Ed Lee, Mayor of San Francisco bestowed the Keys to the City of San Francisco (the “most beautiful city” in the US) to DASSK.  Former Speaker of the House and current Congresswoman Nancy Pelosi introduced DASSK calling her a “Democratic Icon” and quoted the honorable guest as having said: “Please Use Your Liberty To Promote Ours.”

We were some 30 Tibetan and active supporters in the audience of several thousands. Although small in size, Tibetans have a knack for making ourselves visible with our beautiful traditional chupas (dresses) and the handsomely striking Tibetan national flag, which we held up with great pride.  Not sure if DASSK noticed that there were Tibetans among the audience but the audience certainly knew. It was important that we were there to cheer and welcome DASSK because Tibetans, too, share Burma’s struggle for human rights, justice and liberty.

Understandably, many of the questions pertained to the Burmese communities in exile and political situation inside Burma.

However, DASSK’s responses cut across all communities and human behavior because of the values from which she spoke. Therefore, her messages resonated with me as a Tibetan, as a woman and as a human being.

That said, I am taking the liberty of sharing the highlights from DASSK’s speech today so that we can all feel inspired by her exemplary life-messages. Before the fresh memory of today begins to fade into the background of a busy life, some of us sat down to recollect the essence of her message to share with you. If you were at the event in the Bay Area this past weekend, please accept this as a ‘refresher’ and if you were not, I hope you will find her words as illuminating and inspiring as we did.

So, in San Francisco with flowers in her hair, Daw Aung San Suu Kyi was not only, by her own admission, “appropriately dressed” (a take from ’60s hit song: “If you’re going to San Francisco…”) but she enlightened us for a good hour with the following key messages to reflect on:

Undertake all activities by an honest examination of one’s own motivation.

Approach all activities with humility.

Cultivate an open heart and an open mind – cannot have one without the other.

For those who want to go back to Burma and help, her message stressed importance of understanding that Burmese exiles and people in Burma are at equal levels – no better, no worse in essence – circumstances and priviledges such as access to education, etc. differ.

Before going, it is essential to find out what is needed and what skill set a returning Burmese can bring to meet those needs so they can make a real difference for the people inside Burma.

Generally speaking, she emphasized the need to strengthen and reform education in Burma. Expressed the opinion that people in the past 50 years received insufficient education inside Burma. In that vain, one of her initiatives has been to start Trade Schools for the tourism industry, which she anticipates will pick up in the coming years.

Before criticizing others, work on yourself to make sure that you cultivate respect and tolerance for others (e.g. look at motivation). There are 3 types of criticism: a) based on facts which should not be given until careful examination of circumstances, b) based on people wanting to prove themselves to be better than… and c) based on people’s self-interest.

Rule of law is essential. Laws need to be examined and reformed so they are applicable to the current era and ensure that they meet international standards.

Organizational conflicts are often caused by people’s sense of self-importance (here, DASSK mentioned that she cares equally for the people in the front seats as she does for those working back-stage).

Regarding ethnic issues, she stressed that unity is essential and we should value our differences/distinctions. All the ethnicities are equally important to Burma.

When asked about her reaction to the “Pussy Riots” in Russia: DASSK emphasized the importance of respect and human rights for all. She said each of our struggles for human rights should extend beyond our own country’s struggles but we must respect justice and liberty for others as well. She pointed out that no country’s human rights is of greater importance than another country’s and if we can have that mutual view, we can collectively achieve HR for all.

To international organizations, she advised that they study the situation inside Burma carefully and think carefully who and where resources are being directed. Make sure to support organizations that benefit the people and do so with humility.

She was cautiously optimistic that Burma will take the path toward democracy but cautioned that so far only 40 out of 600 parliamentarians are from the National Democratic League. She stressed that this time of transition is extremely delicate but was optimistic that progress is possible.

When asked if democracy in Burma was impossible, she quoted a sign from a British military that said: “We do the impossible every day. Miracles take a little longer.”

On a lighter note, DASSK also responded to few personal questions such as:

What kinds of books she reads – to which she said as she gets older, she finds herself drawn to poetry, which are often short and leaves room for interpretations by the reader. She reads a book that has a poetry per day in her “spare” time.

How does she relax? Here her response reminded me of the words of His Holiness the Dalai Lama: “The more you work, the more I can relax.”

Has she visited SF before and what is her memory: She said she has and her favorite memory of that visit is SOFT TOFFEE APPLES!! (as opposed to the hard toffee covered apples that she had in India and didn’t like as much!). So much for the beauty of SF!!!

When asked how her 15 years of house arrest was, DASSK responded that she had lots of time to read, listen to the radio and meditate!  Introspection.

She never once spoke about her suffering/sacrifices and she hardly spoke of what she did with the exception of the trade school that her foundation has started. What humility and grace!

Overall, a moment to be cherished in the presence of a woman who is wise, inspiring and a fearless leader in so many ways!

In a world bereft with war and violence, we could certainly use more leaders like Daw Aung San Suu Kyi!

← Death by China
Fear of the Unknown →