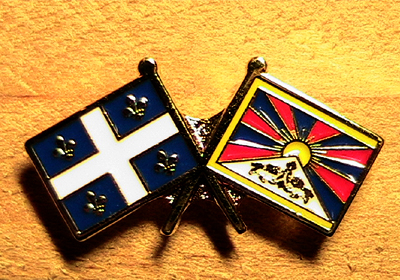 Earlier this month, I took a little weekend trip to Montreal, in the province of Quebec. While Ottawa, where I live, is a city that is more or less bilingual with most people somewhat being able to communicate in French and English, crossing the river that separates Ottawa (in the province of Ontario), and the Quebec side, can sometimes feel like entering into a whole new world.

While Canada has two official languages – English and French – Quebec is the only province in the country whose sole official language is French. And while the language plays a big part – that, along with the culture, and history of Quebec – add to Quebec feeling like a completely different country.

I’ve been to Quebec enough times to know that when you’re going there, if you’re able to, you should expect to speak in French while there – not only because there are some people who don’t speak English, but because, for many, it’s a matter of respect for their language and culture.

That’s why I was pretty shocked at one point when my Francophone friend and I were out shopping during my latest trip to Montreal. My friend asked the salesgirl a question in French about a pair of boots she was looking at. The clerk stared at her blankly. My friend repeated her question and the salesgirl just stood there, like a deer in headlights and eventually pointed us to another salesperson who spoke French. While my friend didn’t say anything to me about it, I was fuming and had to try hard to hold back my stink-eye.

Instantly, my mind wandered to Tibet. I thought about what it would feel like, to be a Tibetan in Tibet, on my own land, and not be understood in my own language. Obviously, and sadly, this isn’t uncommon. Since China’s occupation, they have been working intensely at eradicating our language, culture and religion – significant components of our sense of self and identity. The state-sponsored influx of Chinese people into Tibet has only helped with the cultural genocide that is taking place inside Tibet – with Tibetans being the minority in many cities. When I see pictures of Tibet, I most often see store front signs in large Chinese writing, then underneath smaller in Tibetan writing, if any. I’ve heard many stories about young Tibetans in Tibet not being able to communicate with elders because they can no longer speak Tibetan after having to attend Chinese language schools if they want a good job, or because of Chinese policies of implementing Chinese language to be the main language of study in Tibetan schools.

I thought about how here in Canada, they have programs to promote the French language. Although I grew up in Ontario, at my school we had the option of taking classes in English or French. From grade 4 to 12, nearly all my classes were taught in French with the exception of gym class, and obviously English.  This is unlike how things are done in China, where they incessantly try to shut Tibetans up.

I won’t go into comparing Canada and Quebec vs. China and Tibet, since it can get complex, and irritably, it’s a card that China likes to play against Canada when the Canadian government raises Tibet with Chinese leaders. However, you can’t deny that in Quebec, Quebeckers have the right to learn in French, right to hold a Quebec flag freely, right to call yourself a separatist and be voted into office for your political stance, be able to become Prime Minister of Canada, and even have the right to demand for freedom from Canada without being jailed, tortured, or worse killed. As a matter of fact, in 1980 and 1995, Quebec held referendums for sovereignty, although both were defeated – in 1995 Quebec nearly gained sovereignty, incredibly, the ‘no’ vote was 50.6% to the ‘yes’ vote of 49.4%.

Perhaps all this information flowing through my mind was what caused me to react so irritable when that salesgirl didn’t understand my friend speaking in French. But I think for many Tibetans, almost no situation that even remotely relates to Tibet is just plain black and white for us, our minds always turn to Tibet and our Tibetaness, causing us to react differently than most in all types of situations – just look at how most Tibetans in the United States are reasoning how to vote in the upcoming presidential elections.

← How to Start a Non-Violent Revolution
When Gyalthang became Shangri-La: a critical reading →