How is a Truth Created in the First Place?

(Background on how to read the post: [as can be seen in the comments section to a reader] I was hoping to highlight how certain false information, through propaganda and etc, can be constructed to become a Truth, or in cases of irrelevant information can be prioritized. The post was meant more to explore the CCPs construction of truth-making on Tibet and also anyone who writes on Tibet in either creating a Truth or prioritizing certain truths, in order to, or shy away from, emphasizing the political Truth of Tibet.

“A lie repeated a hundred times becomes the truth.”

Mao is famously known for the above quote. How are certain “truths/knowledges/facts” created? A lie can be turned into the truth so long as you repeated it, according to Mao, a hundred times.

As a Tibetan, I am sure most of you can relate when I say, I’ve had the “Tibet was never part of China” history, full MC-style, battles with more Chinese than I’d like to remember. The amazing part of all this is how convinced most of these Chinese individuals, even the most well meaning, are about the truth of their historical version of China’s Tibet.

So, how then do you begin having a dialogue with these different individuals when—according to them—you don’t even know the truth about your own history?

The discussion then is not, and it never was, about what the truth is, but whose truth triumphs over the other. So then the question becomes, how is a truth constructed in the first place?

About a week ago, as one of the administrators for Lhakar Diaries blog, I was skimming over some new comments that were awaiting approval for the posts “Remembering Tsewang Norbu [one of the earlier immolators] on Lhakar” and “My Pledge,” and I became puzzled. Here is a screenshot of the commenters, comments, their IP address, and what appears to be fake email addresses: 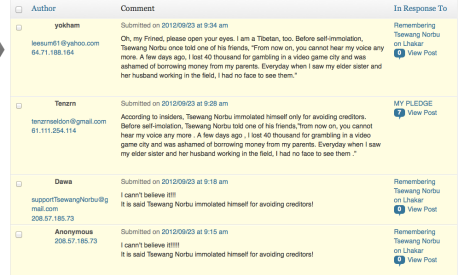 Usually the administrators do not censor comments so long as they’re not spam or hate comment based on race/gender/class/creed etc.

As I looked over the comments carefully, I noticed the similarities in the vocabulary and sentence structure. The comments, all written on the same day, were made only minutes apart from each other. It was clear someone was trying to run a smear campaign aimed to diminish Tsewang Norbu’s significance. Nonetheless, I decided to look up the IP addresses:

Both Anonymous & Dawa seems to be the same person and the IP address traces this person to be in Miami, Florida. Tenzrn’s IP traces to Seoul, South Korea. Yokham’s IP traces to Toronto, Ontario-Canada. Although Tenzrn and Yokham’s IP addresses trace to two different countries, interestingly, yokham made his/her comment 6 minutes after Tenzrn. Not to mention the similarities in the writing styles.

Why then, am I publishing this person/s comments when I could have easily marked it as spam and delete it? Why give this comment some airtime?

While looking over this and noticing the weirdness and irrelevantness of the commenters information, it made me think about how this person/s had actually tried to disseminate a random comment in a now popular blog (at least I think LD has become popular) read by young Tibetans, in an attempt to construct a truth.

Whether the content of the comment about Tsewang Norbu is true or false is clearly irrelevant to his immolation that led to his death.

What’s important however, is the attempt by these comments to change/minimize our views of Tsewang Norbu and to construct a new cultural behavior/feel/truth to how we as Tibetans should view him.

It’s an attempt to reframe his personhood in a negative light. To produce a new truth, a tainted one, to reconstruct the narrative on Tsewang Norbu from that of positive to negative and to diminish the significance for what he stood for when he immolated.

6 thoughts on “How is a Truth Created in the First Place?”