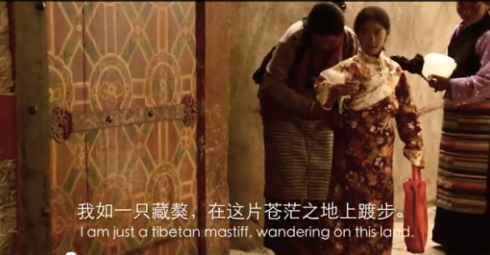 I just came across this video, which seems to be a loose response to  the “I am Tibetan” videos that have come out of Tibet and in the diaspora to encourage the Tibetan identity.

This guy (who pronounces all the Tibetan names wrong) is clearly Chinese (his name is Vinnie Hu), declares “I am a Tibetan Mastiff” to represent himself as a Tibetan who is metaphorically a Mastiff.

Mastiff’s, although magnificent, are dogs, kept as pets (now expensive pets). He seems to equate the Tibetan to that of a magnificent animal. It almost sounds exactly like the “Nobel Savage” trope, which is described as:

This trope always comes with its opposite default, the Barbaric Savage or just Savage.

“the Savage Indian, a native of their land who is a bloodthirsty man or woman who only wishes to kill”

During the 2008 uprising, angry Chinese netizens called Tibetans, ungrateful barbaric savages who did not appreciate the modernization/civilization brought to Tibet by China. In other words, Tibetans don’t know whats good for them.

“The idea of the Tibetan being luohou (backward) is entrenched in the official state discourse on Tibet; and the perception has penetrated the Chinese popular image of Tibet. Yet it is notable how recent an invention this is: it has been systematised only after the conquest of 1959 […] This makes it all the more shocking to the rulers when elements of this docile and indolent native population protest: like a fish speaking back to ichthyologists.”

This video encourages the stereotypes most mainland Chinese have for the Tibetans. In 2008, it was the Barbaric Tibetans, Vinnie Hu’s video depicts the Tibetans as the Nobel savage. Hu goes a step further, he pretends he IS Tibetan (a dog, nonetheless) and, therefore, Chinese.

Native communities have traditionally encountered these two bipolar tropes that subject them to the two sides of the same coin. Noble or Barbaric, both are considered backwards savage.

The Tibetans, for Hu, represent the magnificent Mastiff, majestic, but almost, non-human.

(Update 9/12/12: This recent article in the New York Times “Many Chinese Intellectuals Are Silent Amid a Wave of Tibetan Self-Immolations” is relevant to the above post:

“One prominent filmmaker, speaking more candidly than usual, but only under the condition of anonymity, noted that many Chinese are alternately fascinated and repulsed by Tibetans. ‘We Han love their exotic singing and dancing, but we also see them as barbarians seeking to split the nation apart,’ he said.”)

← Standing up for Tibet through Theatre
The Tibetans of Belleville →