A friend recently messaged me to ask about Lhakar. He had some questions regarding what it was and how it started. While in conversation, some interesting questions came up. I’ve decided to share two in particular because of how simple they come off. When trying to answer them, I was thrown off a bit too, but I think most people have the some confusions regarding these 2 seemingly “simple” questions. Here are the Questions and the short Answers I’ve attempted, feel free to add or correct the answers I gave. 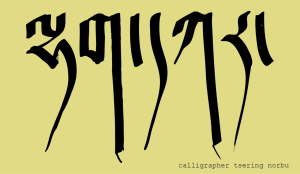 A. Since 2008 uprising, young Tibetans started a movement emphasizing the importance of language and culture through poetry gatherings, cultural dance performances and art. They officially dubed the movement Lhakar (White Wednesday)–Wednesday is the day HH the 14th Dalai Lama was born and also represents his “soul day”. Lha is short for Lhakpa (Wednesday) and Kar is short for Karpo (White)- as a way to assert Tibetan identity while challenging China’s official narrative (and occupation) of Tibet by picking Wednesday to do it. The movement has become even more dynamic from when it started to include anyone young and old. Also, Lhakar is now observed everyday of the week.

Q. Is there a leader within the movement?

A. Lhakar is not a single body or organization. Anyone can participate in Lhakar so long as s/he is taking part in asserting/empowering their Tibetan identity and/or while challenging the Chinese occupation.

It can be as simple as an individual speaking Tibetan on Lhakar to emphasize the importance of Tibetan Language. To, hundreds of  Tibetan students demanding language Rights, which happened in Amdo a few months back.