On the History of Ignorance about Tibetan Literature

Last week I began my post by declaring my gross misconceptions about Tibetan literature. And while, being once unaware that my country has one of the great literary traditions of Asia – one that influenced places like Mongolia, Ladakh, Nepal, Sikkim, Bhutan, parts of northern Pakistan, northern India, western China and southern Russia – was certainly my failing, the fact is, most of the world and most Western academics studying Tibetology weren’t exposed to the existence of Tibetan literature until the 1970s. In fact, the study of Tibetan literature itself is very new even today, as most Tibet scholars have focused on Buddhism or political histories.

But how can such an enormous and influential tradition go so tragically unexplored for so long? As I wrote last week, Tibetan literature is over 1300 years old! Well, Jose Cabezon and Roger Jackson (click on book image above for Tibetan Literature: Studies in Genre) state that this can be attributed to Tibet’s relative and self-selected isolation at a time of Western colonial expansion. In the 18th and 19th centuries, while Western colonial powers were looming around Asia and learning about Asian literary traditions, Tibet had entered a period of hard-core, systemic isolation from the rest of the world. Only a handful of the most determined and adventurous outsiders (ie. Ippolito Desideri, Alexander Csomo de Koros, L.A. Waddell etc.) ever made it past the teeth of our mountainous borders and stepped onto the “Roof of the World.”

Thus like an unapproachably good-looking woman with brains to boot, Tibet (seen from a distance) became known not for its literary prowess but for its exotic, mysterious facade as “Shangri-la.” Check out the novel and feature film adaptations of Lost Horizon for a taste of mass-market Tibetan orientalism in its earliest form. 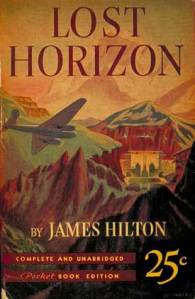 Ironically, it was the loss of our country, the occupation and the exodus of over 100,000 Tibetans (including my parents and grandparents), which led to the rest of world learning about Tibet and Tibetan literature. As mentioned earlier, this fascination with Tibet was first and foremost focused on Tibetan Buddhism and our political struggle.

These days, the vast Tibetan literary corpus is slowly being translated, but only a small fraction of it is complete, much of which have been largely religious or philosophical texts. Perhaps this is simply because of the personal interests of Tibet scholars however there are those like Tsering Shakya, Lauran Hartley, Lama Jabb and others who are expanding our understanding of this field.

Before continuing further with my exploration of Tibetan literature, I also want to touch on two things that I think are foundational to understanding our textual heritage.

(1) Tibetan literature in its written form was preceded by a sophisticated and ancient oral tradition including epic poems, folk songs, works on laws and politics, and legendary narratives. But because literacy grew in the monastic and aristocratic realms first, much of the written works we have focus on topics that interested these particular groups (ie. Buddhism and songs praising kings).

Lay people were producing literary texts and continuing the oral tradition, however we know little of this because they were less likely to be published. As literacy grew, Tibetan literature has thus been dominated more and more by written over oral forms and the emergence of lay literature.

(2) The notion of “literature” in Tibet is different from that of the West. Literature, as we know it, is an idea from the Euro-American world and has been used to describe writing that is imaginative and not purely factual. Literature in Tibet refers largely to writing that is of some value to the reader, of some positive moral transformation. For example, Tibetan tragedies (as seen in The Sutra of the Wise) are not an end to themselves, meaning they’re not meant to just express sorrow or allow catharsis. They are a call to transcend that which can be transcended.

Thus we need to view Tibetan literature, or what we can access of it anyway, as representing a small, literate portion of the population and as something that can’t necessarily be understood through a purely Western lens. Knowing our limitations is the first step, eh!

Alright, that’s all for this week. Next week, I’ll delve into who influenced Tibetan literature the most. Hint: it wasn’t the Chinese!

This is NYCYak signing off. Ghale Peh!

← Routes to Roots: the journey of a Tibetan youth
My local Tibetan restaurant →

4 thoughts on “On the History of Ignorance about Tibetan Literature”