This past weekend, I went home to visit the family, and my Amala gave me this little trinket to attach to the ‘tsemdhue’ around my neck (a red string which is supposed to be a “protection and blessing cord” blessed by a lama). 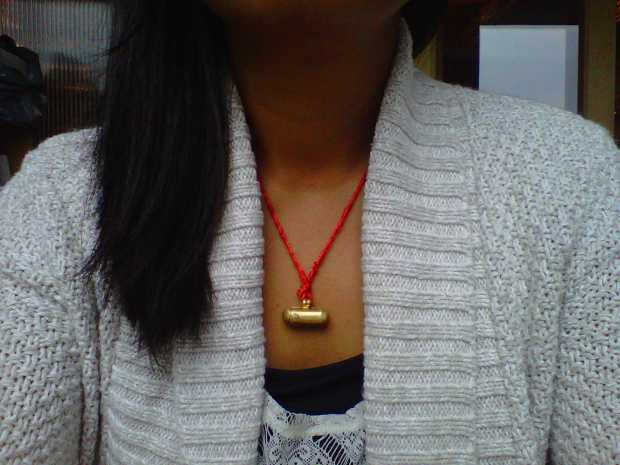 When I asked her what the trinket was exactly, she didn’t really know, but knew it was blessed by a lama.

I remember coming across similar-looking objects twice before, but was hoping for a full Tibetan folklore-type story Amalas are known for and awesome at telling.

The first time I saw one was last year when I visited India and saw my little cousin wearing one attached to a ribbon of cloth she wore across her body, like a warrior. When I asked her what it was, she said that it was there to protect her, before running off to play with the other cousins.

The second time I came across this was more recently, when I was in India again a few months ago. I was given one, and was told the story behind these amulets. I can’t remember every detail, but here are a few points I found online about these amulets and the fascinating story about how they tied into the Tibetan resistance movement:

Obviously, these notes aren’t as exciting as a well-told story from an actual guerilla fighter, but should give you the gist of the story behind these amulets and the Tibet resistance movement. If you want a more detailed description and account about these amulets, you can check out these two great reports I found:

I’m still not 100% sure whether what Amala gave me is the same type of amulet, but I don’t care what Britney says, if these are going to protect me (or at least allow me to believe I’m protected), why not!